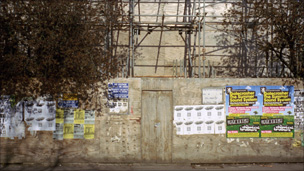 Artist and film-maker Patrick Keiller, will create a new installation for the Tate Britain Commission next year, it has been announced.

Keiller, who has not revealed exactly what the artwork will be, will develop the piece for the neoclassical Duveen galleries.

He said he was “delighted” to be asked. His work will be unveiled on 27 March.

Every year Tate Britain commissions an artist to “develop a new work in response to the Tate Collection”.

Artists who have previously taken on the Duveens Commission include Eva Rothschild, who filled the galleries with a huge black sculpture.

Over the past 30 years Keiller has made several documentary films, including The Dilapidated Dwelling and Robinson In Space.

“As someone most usually involved with images and the linearity of narrative, I’m delighted by the invitation to devise an exhibit for a sculpture gallery,” he said.

Tate Britain director Penelope Curtis said: “Patrick Keiller’s sustained interest in understanding the British landscape, and how it is represented, strikes a perfect chord with the Tate Collection.

“We are delighted that he has accepted our invitation to work with us in compiling a new installation which brings the old and the new together, and shows how similar concerns run through time.”

Darren Almond and Trains in Cinema